How do I change the polarity of the power supply? 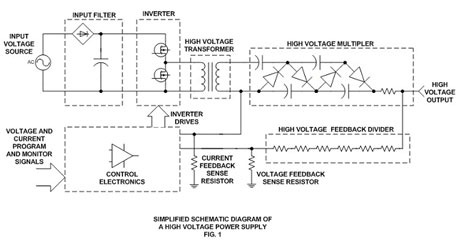 The multiplier circuit is comprised of an arrangement of capacitors and diodes. The orientation of the diodes will determine the output polarity of the unit. In the example above, the diodes shown would create a positive output polarity with respect to ground. If each diode was reversed in orientation, the multiplier would generate a negative output voltage with respect to ground.

Typically the capacitors and diodes used to fabricate a multiplier assembly are soldered directly to a single or sometimes several printed circuit boards. Frequently this assembly is encapsulated for high voltage isolation purposes.

To simplify the process of reversing the polarity (like in the instance of the SL Series) a second "opposite polarity" multiplier is provided above 8kV when reversibility is required. Exchanging the multiplier is a simple task needing only a screwdriver and few minutes of time. Modular style units due to their simplified designs, are typically not capable of having their polarity changed in the field.